Well, I'm not really gardening in the winter, but my garden did get a make over. When I moved into this house it had a huge garden, a family of five were fed from it.  Since it's just me, and I haven't been able to train my dog to pull weeds, I had to do something that was more manageable.  I built hired someone to build the garden boxes and then at the end of this summer, I added one more smaller one at the bottom. Nice fence, huh. I found out this weekend that my neighbors house is going into foreclosure, and it's going to take 9 - 12 months for the process, and that the owner has quit paying the mortgage. How much luck do you think I'm going to have getting him to split the cost of a new fence? 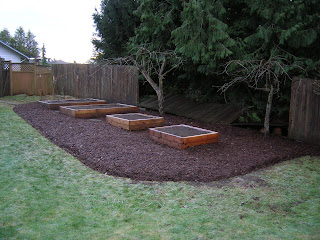 On the 27th of December, the landscaping fairies came and left and in one day did this.  Saturday was the first time I got to see it as I have been coming home in the dark and then it snowed the night this was done and then it froze.  So this has been covered with snow. I did know they filled the boxes with dirt, so now I'll be ready to plant.  No having to shovel hire people to shovel dirt into them in the spring. 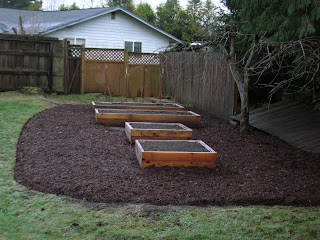 There's been some quilting going on in the studio this weekend, but it's been for other people. I'm poking away at block 7 of Beyond the Cherry Tree and I did some more hand quilting on my Baptist Fans. 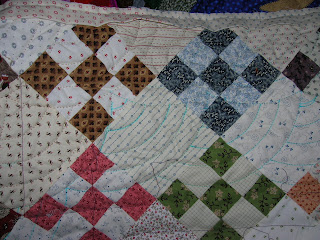 Oh, and I booked a ticket to NYC to see the Red and White quilt exhibition. Whoohoo!
Sharon
Written by Sharon at 10:35 PM

See you there!!! What days and where are you staying?

What sort of plants do you intend on putting in the boxes? Something to withstand the weather, I suppose.
Take plenty of photos for us when you hit NYC, lucky girl!

The garden looks wonderful. Too bad about the fence, hopefully They will try to do something about it.
Your trip sounds too exciting! It is going to be beautiful. Don't for get to take pics for us, please.

I'm jumping up and down for you re the quilt exhibition. woohoo!!!!!

It's going to be fun to plant those raised beds. Hopefully, somebody will take an interest in the property next door and fix that fence?

I'm thrilled for you getting to go to the red and white exhibit! 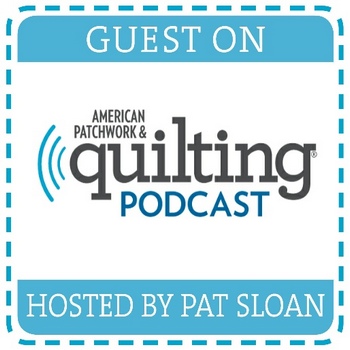